What on earth is that logo about?

Some logos are self-explanatory, others have been around for so long that we can just recognise them in any language (Coca-Cola) and a few have been simplified so that the company name doesn’t have to even be there any more (Nike). On occasion, a logo can be the cause of a bit of controversy when it’s first launched. I remember years ago when the Commonwealth Bank’s new logo was unveiled, one wag commented that it looked like a Sao biscuit dipped in Vegemite. So what does the logo represent? Who knows. But it’s simple, strong and will stand the test of time. Which is just as well because it cost a motza to design.

But not every company is a big one, not everyone has a big budget and designing a good logo is difficult. It’s much, much, much harder than it looks. (I know. I studied graphic design and became a copywriter!) Anyway, I’m sure that most business owners and most designers are giving it their best shot. Having said that, this photo was taken by a client of mine. He showed it to me during a brainstorming session and wanted to know what the heck they were thinking. Below is my best attempt at coming up with an explanation. 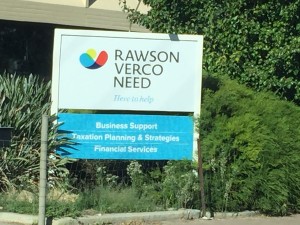 The difficulty in designing an original logo

Look around and you’ll see a ton of logos. They’re everywhere. So it follows that designing something that doesn’t look like someone else’s logo can be a challenge. And here are 3 more challenges:

But what does the logo mean?

My best guess for my client is that the 3 primary colours represent 3 partners and the 4th colour, the blend of them all, represents the combined skills and strengths that you as a client of their business, will enjoy if you engage them. Turns out, two firms have merged so the blend also makes sense there. Personally, I think it looks like a print company’s logo. But my real issue is the words. Here to help. Business Support. Taxation Planning and Strategies. Financial Services. I think they should really think about putting the word ACCOUNTANTS somewhere. Basic? Yes. But sometimes it’s easy to miss the simplest things. Especially when you’re busy designing a camel. Oops, sorry, I mean horse.

I have 4 cafés within walking distance of my home office but I don’t go to any of them. Instead, I get into my car and drive 5 minutes to my favourite cafe.