HEADLINES — UPPER CASE or not? Full stops or not? 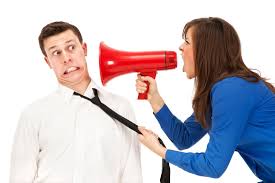 A client of mine, Jeremy Lomman of SOS Interim, writes to me every now and then with suggestions for blog posts. I welcome this as after 150 of them, I sometimes wonder what I could possibly have left to say! Recently, he’s sent me a couple of emails about headlines. He asks the question “Should a headline be in upper case?” Sure it attracts attention, but now that we have emails and texting, IF SOMETHING IS IN ALL CAPITALS, IT MEANS YOU ARE SHOUTING. AND NOBODY WANTS TO BE YELLED AT.

But what about legibility?

Now, I’m not generally a fan of a lot of capital letters, and haven’t ever been, even before it became known as shouting. My reason is that while it may grab your attention, a bunch of capital letters is much harder to read than lower case letters. I came across this interesting fact when I worked in my first copywriting job at The Advertiser’s Creative Department. My job was to write (or fix) press ads for clients who didn’t have an ad agency. Our department had 5 graphic designers and me as their first copywriter. Plus our boss. This was in the good old days, the early 90s, when newspapers ruled.

Before I realised I was really a copywriter, I was studying graphic design at Croydon TAFE. Typography was one of the subjects and while I totally hated rendering the entire Greek alphabet by hand (thanks Laurie) it did give me a great appreciation and real understanding of type, different typefaces, their structure, design, beauty and legibility. Sadly, computers have made it all too easy to just bung in 5 different typefaces, distort them all to fit and voila! everyone’s a graphic designer. But sorry, I digress. Back to upper case in headlines…

A press ad from the 90s tells this story

While at The Advertiser, I came across a full page (broadsheet size) ad for the Newspaper Advertising Bureau of Australia. It had been created by Jack Vaughan and Rob Tomnay from Campaign Palace, a Sydney advertising agency. I still have a photocopy of this ad, today. They talked about the ideal layout of a press ad, the best places for headlines, logos, pictures, long copy and short copy, also various typefaces and their legibility. And whether the headline should be in upper case or not. Here’s what they had to say…

‘One school of thought argues that capital letters in headlines achieve more impact. But the eye is presented with A SERIES OF SOLID TRIANGLES AND RECOGNISING WORDS BECOMES A TASK INSTEAD OF A NATURAL PROCESS.’

Test it out for yourself

And while we’re on this topic, I am reminded of something that appears to have become flavour of the month recently. Initial caps. Which Means That Every Word in The Headline Has a Capital Letter. This slows down reading. Which you don’t want. You want your headlines and copy (text) to be easy to read, not difficult. I have had a discussion about this with an SEO guy I know and he reckons AdWords and Google loves it. Ok, but I’m not so sure that people do. And when we’re writing for the online medium, we need to cater for bots and humans.

What about full stops at the end of a headline?

Jeremy commented that this seems to be a new thing. He asks,‘‘when did it become trendy to not end a sentence with a full stop? What are the rules?’’ Well, I have deliberately NOT been putting a full stop at the end of a headline for over 20 years, ever since I read Confessions of an Advertising Man, David Ogilvy’s famous book on advertising. David Ogilvy was widely considered to be the father of advertising and this book was considered to be the advertising bible. The 2012 paperback edition gets 4.5 stars on Amazon — not bad for a book that was first published in 1963.

I remember reading that David Ogilvy said ‘‘full stops stop people reading’’ so don’t use them in the headline. Evidently he commissioned some research to see if a headline was better with or without the full stop. Here is an article about that, if you’d like to see the results and I also found the comments from the participants of the study very interesting. The research showed that no full stop is better.

But what do you think?

I strongly suspect (English) teachers will have a problem with no full stops. Graphic designers would probably prefer no full stops because it looks better. Very occasionally, one of my clients insists on the full stop. I make sure I tell them about the research but it’s their website so they get to decide. If you have a strong opinion about all capitals or full stops, please leave a comment, I’d love to hear your thoughts.

P.S. There are no full stops at the end of headlines in the newspapers. Food for thought…

The problem with good design, good typography or good writing is that you don’t really notice it - until it's not there.